There is a heavy focus in DPE on improving build and test cycle turnaround time, i.e. the faster the build, the more productive engineers are. And you’d be excused for thinking this is the #1 answer to improving developer productivity.

But what about the elephant in the room: time spent on debugging in the local development loop, as well as debugging CI and system integration test failures?

Question: Do you know how much time your software engineering team spends debugging in a 12-month period?

Depending on which research you look at, developers say they tend to spend 25–50% of their time per year on debugging. That is 25–50% of developer time not spent on more creative, enjoyable work… like programming!

If you have a hiring freeze (or worse, a reducing headcount), developer productivity really ought to be the most urgent lever to address.

A bit of arithmetic

Do your own back-of-the-envelope calculations; and if you don't know how much time the engineering team spends on debugging, it's time to find out!

The problem of reproducibility

What if you could get the cost of debugging down by 50%? But, more critically, what if you could cut down the time engineers spent on debugging from 30% to 15% – allowing engineers to spend an additional 15% of their time on building new functionality, or delivering changes faster?

Give every engineer back > 30 days per year!

Well, first, let's look at why debugging is so time consuming.

91% of software developers admit to having unresolved defects because these defects cannot be reproduced. [see analyst report]

41% say that the biggest barrier to finding and fixing bugs in their backlog faster is to get the bug to reproduce. [see CI research report]

In other words, reproducibility is the fundamental technical problem that absorbs the bulk of the time in debugging. It also happens to be the most frustrating part of the job. When a failure in QA lands on an engineer, it takes time to figure out whether the failure is a new regression or not, then figure out where to start, and how to reproduce the problem. At the point when engineers pick up a bug to resolve, they often can’t know how long it will take to figure out the root cause.

The uncertainty is uncomfortable and can increase levels of stress and anxiety. This unpredictability seriously affects software team's ability to deliver and doesn't offer a conducive environment for developer happiness. Diverting developers away from the more rewarding and creative tasks of new feature development is often seen as among the major reasons for high turnover in software engineering.

What is time travel debugging?

Time travel debugging is the ability to wind back the clock to any point in an application’s execution and see exactly what it was doing. Among other things, developers can :

There’s more to it, but that’s the basic principle. Learn more about time travel debugging.

How does time travel debugging reduce time spent on debugging?

Time travel debugging provides engineers with a recording of a test or production failure. Having the recording is like having the complete movie at your fingertips (instead of a bunch of still snapshots to piece together for clues). No time needs to be spent on manually trying to reproduce the problem. The bug is captured in the recording. And the recording will always behave the same way… for everyone. No more “Works on my machine!"

Engineers can travel back in the code execution from the symptom directly to the root cause. Developers analyze the recording and see what the software really did and where it diverged from what they expected. (as opposed to what it was expected to do).

Last but not least, by allowing all developers to explore how the code is executed (every line of code in every thread, every variable, every I/O), junior developers or developers new to the codebase can solve complex bugs just as efficiently as more experienced team members.

"Everyone who debugs C/C++ should be using time travel debugging. If you're not using it, you're just wasting time."

LiveRecorder provides a one-click workflow from a test failure to a time-travel debugger placed exactly at the point of failure – skipping the tedious steps usually required to reproduce the problem and enabling developers to start debugging test failures instantly.

Developers working on complex C/C++, Go, and Java software can now save a huge amount of time diagnosing the root causes of new regressions, legacy bugs, and flaky tests.

Bugs that took days or weeks to fix can now be resolved in hours. 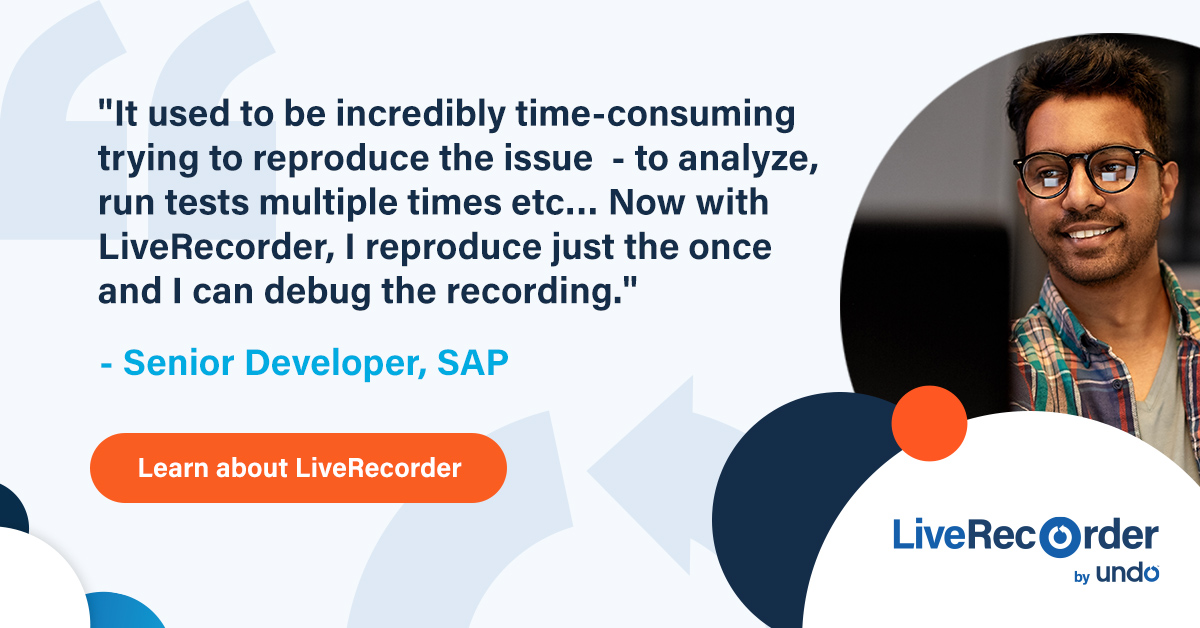