Software Runtime Errors in a Locked-Down Enterprise IT Environment...

Despite your best quality assurance efforts, something goes wrong with your software at a customer site. It hangs. It crashes. It produces incorrect output. It occurs intermittently.

Making matters worse, your customer is unable to send you logs, data, or dumps because they contain sensitive information, which cannot be allowed to leave the premises.

If you develop enterprise software that operates on customer data then you’ve probably been in this situation. It’s especially familiar to developers of data management, networking, security and other enterprise IT infrastructure software.

This is a stressful situation. Gartner estimates that network downtime, for example, can cost your customer $5,600 per minute. And it looks like you’ll have to send engineers to your customer site, which puts their regular development schedule at risk.

We are familiar with the situation too; our software flight recorder technology helps enterprise software developers pinpoint causes to defects that could not otherwise have been found. Live Recorder records system state changes as the application runs, and the recording can be played back any time, anywhere, and debugged interactively, revealing the exact cause of serious bugs.

Unfortunately, like log files, customers may have policies that prevent Live Recorder recordings from leaving the premises.

We’ve addressed this need in the newest release of Live Recorder. Your on-site field engineers (or customers themselves) can connect to the running system and debug it live, interactively. It allows developers to step backwards and forwards through program execution--even after a critical runtime error such as a crash or hang has occurred.

Live Recorder is the fastest defect diagnostics & resolution software on the market. Memory checkers like Valgrind provide valuable insights, but they can can slow down application performance by 50x. That means that a defect that normally takes 1 hour to occur, will take over 2 full days to arise in the monitored execution state.

Live Recorder only reduces performance speed by about 2x according to customers. And in the new release, we’ve added “snapshots” and fast-forwarding to recordings.

Snapshots are inserted into the recording automatically. As the recording file grows, the snapshot is periodically updated with the most recent system state information. The approach is similar to snapshots in database or system backup context.

During replay, users can fast-forward directly to the snapshot, then playback to the end of the recording (that’s usually where catastrophe strikes) and start the debugging from that point. Fast-forwarding allows Live Recorder 4.10 to advance to the end of a compressed recording file 6.4x faster than the previous version, and 4.8x faster than an uncompressed 4.9 recording. Not only does this reduce time to debug, but it also means 4.10 users can benefit from recording file compression (usually ~5x) without time-to-debug sacrifice. 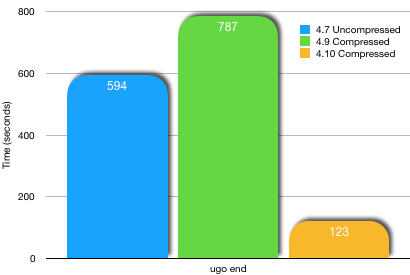 Live Recorder has helped companies like SAP, IBM, and Cadence find the causes of impossible to reproduce defects. The latest release of Live Recorder makes defect resolution possible when diagnostics become even more impossible, as in locked-down enterprise IT environments.

The 4.10 features are part of a larger 2019 Live Recorder product plan focused on making remote diagnostics of software failures feasible in secure IT environments whilst simplifying the debugging of complex multi-process and distributed systems.

If you’d like to see a demo of Live Recorder or test it out on your software, let us know!