Under pressure to ship quality products faster, but with ever more limited resources?

If you have a hiring freeze (or worse, a reducing headcount), boosting developer productivity is likely to be your most urgent priority.

Improving build and test cycle turnaround times is a good starting point. But what if you could reduce the number of build cycles, rather than just get builds to run faster?

All too often, when a test fails, a lot of time is spent trying to get enough information to diagnose the issue through an iterative cycle of: add logging, rebuild, wait for the build cycle to complete, rerun (potentially multiple times until the failure reproduces), and examine the new logs. Not enough information? Add more instrumentation, rebuild, wait until the code compiles again, etc.

Each iteration in the search for diagnostic information requires another build and another round of idle time. It’s not uncommon for developers to have to go through 5–10 of these iterations over several days before the root cause of the bug is identified.

LiveRecorder is Undo’s time travel debugging solution – used by developers to save time on diagnosing the root causes of new regressions, legacy bugs, and flaky tests on complex codebases.

With LiveRecorder, developers can reduce the number of these build cycles down to 1.

Developers get all the information and all logs they need from one single build. This represents a huge productivity saving. It also means developers can deliver their code changes faster.

Bugs that took days or weeks to fix can now be resolved in hours.

"LiveRecorder is an innovative tool which really eases the debugging process and elevates productivity."

Your build cycle might be faster, but are those tests reliable? If tests come back in 20 minutes but are not reliable, you’re not solving the problem of improving developer productivity.

Flaky tests are one of the biggest hurdles in maintaining a reliable test automation framework. They are also a productivity killer.

There’s a heavy focus in Developer Productivity Engineering (DPE) on improving build and test cycle turnaround times. But what about the elephant in the room: time spent on debugging in the local development loop, as well as debugging CI test failures, overnight test failures, and system integration test failures?

Do you know how much time your software engineering team spends debugging in a 12-month period?

Depending on which research you look at, developers say they tend to spend 25–50% of their time per year on debugging. That is 25–50% of developer time not spent on more creative, enjoyable work – like programming and building new features. 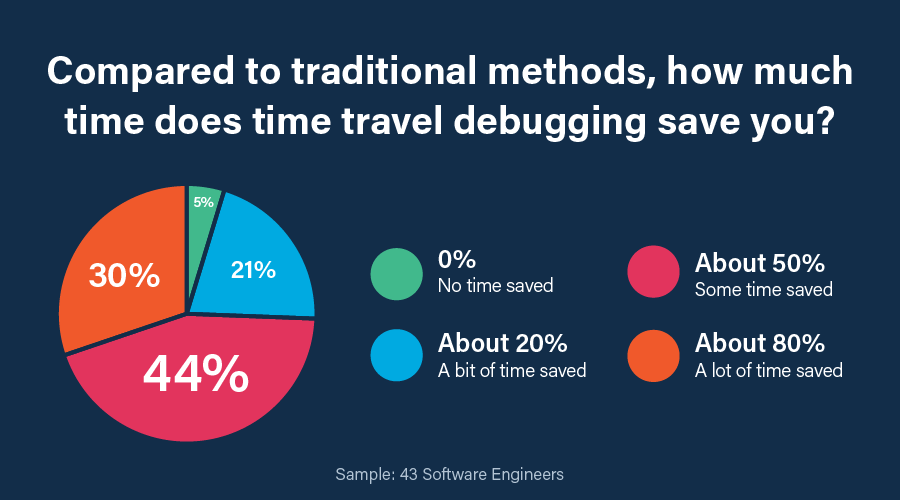 "Everyone who debugs C/C++ should be using time travel debugging. If you're not using it, you're just wasting time."