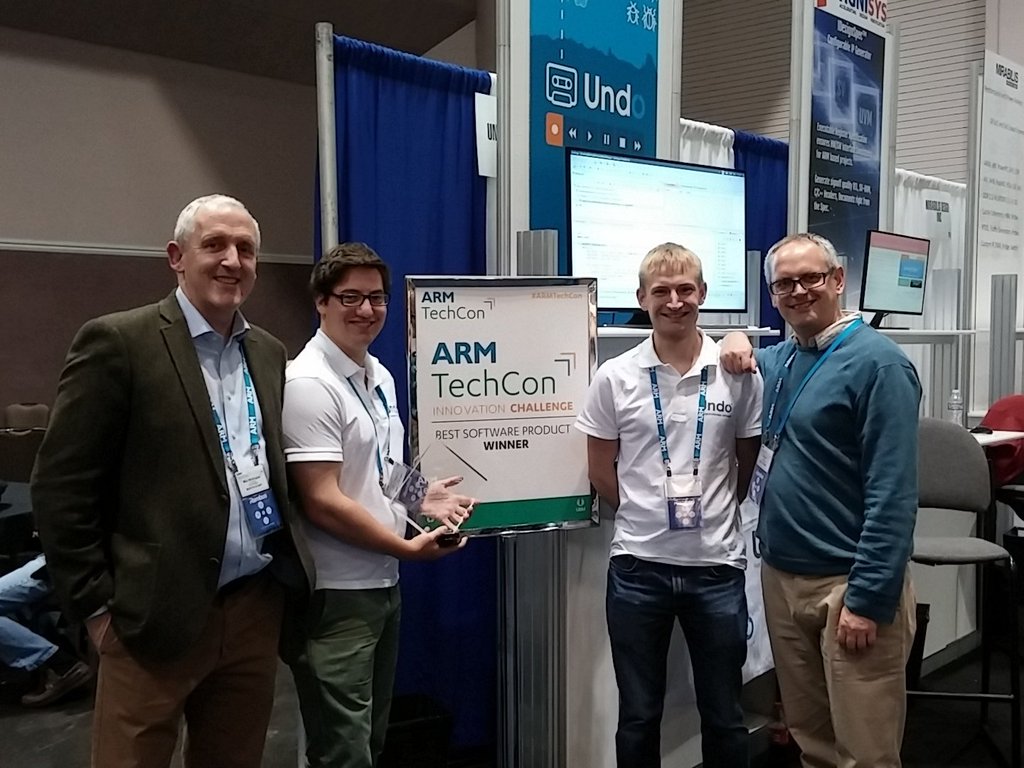 More than 100 exhibitors had the opportunity to enter the Challenge which took place at the annual ARM TechCon conference in Santa Clara, California, yesterday afternoon. Twelve finalists had been hand-picked by a board of EDN/EE Times editors and ARM representatives to compete for six prestigious awards, including innovation on chip, best Internet of Things (IOT) product, best software product, best system and best in show. A ‘Reader’s Choice’ award is still to be determined by EDN readers, who can vote for their favourite product.

Undo was one of four companies to take home a prize, and LiveRecorder won ‘Best Software Product’ because it significantly helps software vendors porting code to the new 64-bit ARM architecture. It is a software library that allows Linux and Android programs to make a detailed recording of themselves so that developers can ”rewind” and replay code to rapidly track down errors. The resultant recording file, which includes everything a program has done saved in a highly compressed and efficient way, can be sent to the developer(s) at a remote location who can completely reconstruct the program’s execution, allowing them to debug an exact copy of the bug as it occurred in production and test environments. It significantly helps the porting process as it allows developers to quickly identify hard-to-find bugs that materialise when transferring from 32-bit to 64-bit architectures.

We are thrilled to receive this award. The technologies exhibited at TechCon show the extent to which innovation is happening on ARM architectures, and I think the judges realised that such innovation can only continue if bugs are identified quickly and easily. LiveRecorder significantly helps the debugging process and we are delighted that the judges know that our product can help companies enjoy all the benefits of 64-bit ARM in rapid time.

This is the third award Undo has received for LiveRecorder in recent months. Earlier in November, the company was cited by the UK national newspaper, The Telegraph, as one of Britain’s top tech firms growing at 1,000 per cent a year.

The ARM Innovation Challenge is an annual competition which takes place at ARM TechCon, a three-day event designed to facilitate collaboration by connecting the hardware and software communities.