This is a talk I gave at the ACCU developer conference earlier this year on GDB wizardry and essential Linux application debugging tools.

As usual, I've pulled out some particularly interesting and useful points below, but do watch the video above to get the juicy details.

Debugging is the most underestimated part of programming

Debugging is the most underestimated part of programming. While it's better not to write the bugs in the first place, there will always be bugs. A quote from Brian Kernighan sums up the situation:

"Everyone knows that debugging is twice as hard as writing a program in the first place. So if you're as clever as you can be when you write it, how will you ever debug it?"

I'd like to think that in the intervening years, we've moved on from the print statement ...

I classify debugging tools in two classes: checkers and debuggers.

Checkers look for instances of commonly made mistakes such as buffer overrun and memory leaks. There are more and more of these. Some are free, some are paid-for and they tend to be very good at saying “there’s the problem”.

But… they’re looking for instances of well-known, commonly-done bad things, whereas debuggers are more general code exploration tools. They are trying to get a sense of: what on earth is my program doing?

GDB (aka the GNU debugger)

I want to talk about GDB. It’s been around for a long time, but it’s come a long way and had quite a lot of active development. I want to show some of the things that it can do that you may not be aware of.

I have pulled out some nice tips here but there’s much more in the video above.

GDB has had python embedded in it for a while and as time has passed, the bindings have become richer. In the video I show how you can run GDB commands from python:

I can also pull out information from the GDB debugging environment, allowing me to use python to script powerful debugging tools. A great starting point is the documentation of the module itself with:

In the video, I also cover the pretty printers which you can build yourself in python, and those which are in-built for STL.

The .gdbinit file stores your configuration but can be the source of some funky, weird stuff. I've seen people put all kinds of things in there that have weird side effects and which make debugging harder and more confusing.

I'm keen on keeping the .gdbinit simple with just:

The first line preserves your command history across sessions, allowing you to use the up arrow to get to commands from previous debugging sessions.

The original implementation of watchpoints in GDB precedes the CPU support for this, so that if you set a software watchpoint and run the program, then GDB will stepi, as in: single step every single instructions and see if the thing you've watched has changed. That's almost certainly not what you want because it’s super slow.

The hardware watchpoint is using the CPU machinery. The x86 will support up to 4 and it will run it at full speed and when the location in memory gets modified, the processor gets a trap and GDB will be notified.

It’s reasonably smart, so if you watch a pointer which points to a thing, it will watch the pointer and that offset in the structure that it points to.

You can also read more about watchpoints in my other gdbWatchPoint post.

The thread apply command allows you to run a GDB command across one or more of your threads. For example:

...will print the stack pointer across threads 1-4. This can be used with the backtrace command:

The last one is for when you really don't know what's going on. It prints the backtrace for all threads with all the local variables for every stack frame. This can be useful if, for example someone is reporting a bug you can't reproduce and you need a good starting point.

Maybe printf is the lamest way to debug but actually it is useful. Perhaps this is partly cultural because every programmer started doing debugging like this.

This is not a great reason for it being useful. A better reason is that printf is really good to get a high level view of what's going on.

The problem with printf is that to get more information you have to recompile your program. The dynamic printf command, dprintf let's you do this - change what printf is doing - from within GDB.

In an example I show in the video, I know that a function mutex_lock_fn is given a mutex structure which I can get a high-level view of with:

This is actually a breakpoint which is set on the location mutex_lock_fn. This means I can add conditions to it like:

In the video I go into more detail on how dprintf can be configured for different debugging scenarios.

In my experience Valgrind just works. It can be slow depending on what your program is doing - the slow-down can be 10x, 100x maybe - but it’s very easy to use and does just work. It’s very useful for finding uninitialized variables, buffer overruns if they are allocated on the heap and simple memory leaks.

We scratched our heads and investigated, but we couldn’t get to the bottom of it. So in the end somebody very smart suggested that we run their program without our library but through Valgrind. And sure enough, there was uninitialized data on the stack which they were getting away with without our library because when our library was there it moved things around.

We didn’t have access to the source code. This was a binary from the customer. Valgrind was still a useful way to debug that things with almost nothing to go on.

If I take a program, compile it and run it through Valgrind: 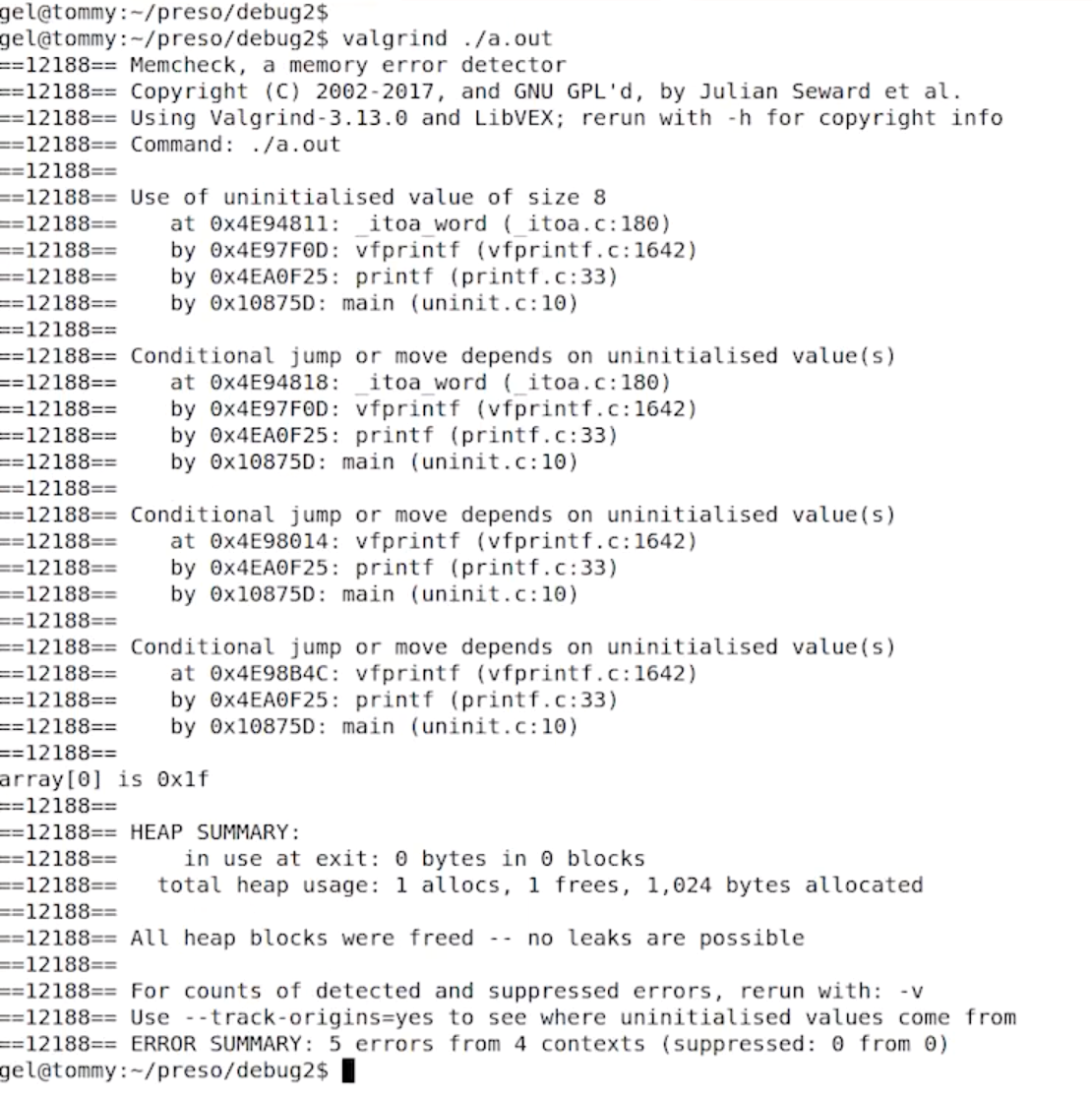 Valgrind has its own implementation of the GDB server inside it which you can then attach GDB to. So if I run:

... Valgrind then runs and tells me that to attach GDB I have to start gdb and do this:

That gets me into the Valgrind GDB so I can get my backtrace and poke around and see what’s happened:

Sanitizers - address sanitizers being the most well-used I think - originally came along in clang and now exist in gcc as well. It seems to be the opposite of Valgrind - all the stuff that Valgrind is good at, sanitizers aren’t and vice versa.

Sanitizers are very fast and have good compatibility with other things; so you can use this with reversible-debugging, for example. You do need to recompile because this is a thing that the compiler does, and you’ll notice that the address sanitizer does use quite a lot of memory.

While using an address sanitizer is fast, it does have a measurable effect on performance; so one thing you can do is set functions to have the attribute “no sanitize address” if you’ve got some function called in a tight loop that you’re pretty confident is correct.

I’ve got this program, which is clearly not a very good program, stack.c:

If I run this, it spots the problem and tells me where it’s happened: 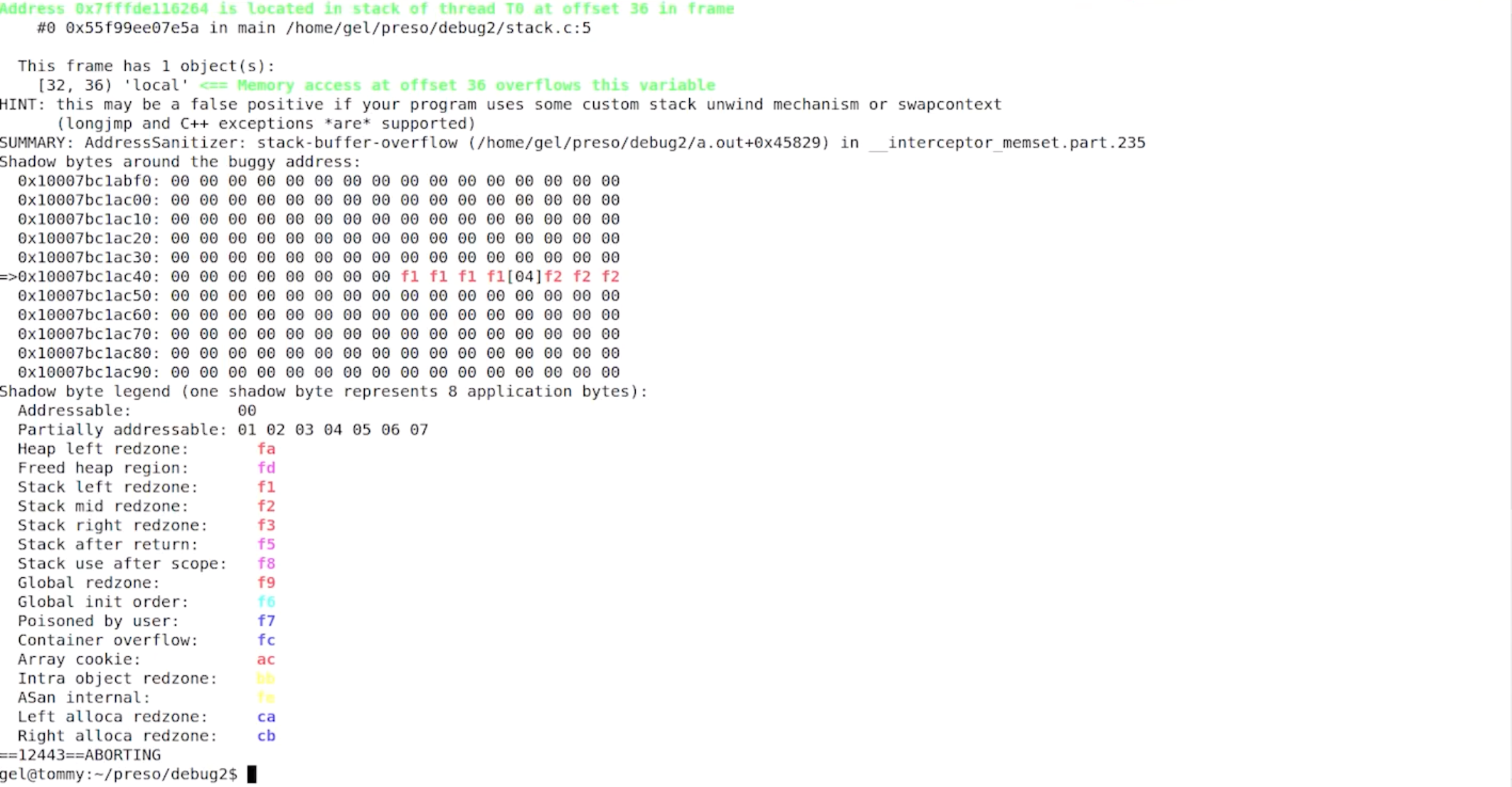 As it’s a bit too generous to show all this other stuff and not our own LiveRecorder. Let’s show this on a bigger process. I’m going to fire up LibreOffice and find its process ID with:

... which is the thing I’ve just started. I can attach to this with:

And I can see that when I type, it’s a little bit slower but basically works. I can create a file, save it and close LibreOffice.

LiveRecorder will have written the event log which I can load up into LiveRecorder's reverse-debugging engine (UDB) and do the same kind of debugging as I’ve shown with GDB.

Find and fix bugs in minutes with time travel debugging